Tomorrow, we will of lived in our house for a year!

I have seen a few people write about how they arrived at their current home to celebrate such an anniversary!

I had a quick glance around the internet’s and realised that most of our old houses are on there, so I thought y’all might be interested to see how we arrived at The Glade.

We we signed up for our first mortgage within weeks of my 18th birthday! We completed on our first, one bedroom house, in January as we got married later that summer – it’s what you did back then!

By the next summer we had out grown that house and moved to three  bedroom mid Victorian terrace. We tore the house apart and spent a year renovating it. We lived in the main bedroom for months.

I remember being desperate for the hall carpet to be fitted before my 21st birthday.

Eventually we became a family of three there!

Seven years later we moved to the South East and rented this little house for six months while we got to know the area.

It had been a difficult time for us because Himself had been commuting to Milton Keynes, leaving me and Ms Glade during the week. I was exhausted because I was also working full time.

Ms Glade had her first garden to play in.

Six months later we decided to buy this house which was a 10 minute walk from the rented one.

We had some lovely neighbours and a beautiful garden.. But the pull of home,  especially Himself’s parents grew too much and, 3 years later we grabbed the opportunity to move back up North. 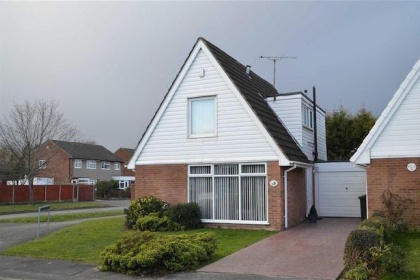 We lived here for the next 12 years, welcoming Miss Glade and Jack into our family, getting on with work and educational matters. The girls were able to walk the half a mile or so, to their Grandma’s and, have spent lots of lovely times with her as they have grown up.

One year ago we moved to The Glade.

Hopefully, this will be our forever home but it would be nice if it was finished soon!

Looking at these houses doesn’t make me sad or sentimental, I realise that home really is where ever your nearest or dearest are!

I hope my wander down memory lane didn’t bore you too much, I am hoping that you love this link as much as me because, like me, you are nosy, if that’s the case, I bet it was right up your street – see what I did there?!?!

* Pictures that I was missing are snaffled from RightMove!

18 thoughts on “Our House Anniversary!!”