There are seven and a half years between my girls. We didn’t plan it that way, indeed given a choice we would have had them much closer together. But there you have it, we don’t always get to decide!

By the time she was about five, the eldest was getting quite desperate for a sibling. As an only child, she had joined every club, scheme, choir and class imaginable. She made friends wherever she went and, all her friends seem to have siblings. In desperation, she even asked Father Christmas for help, who rather sweetly looked at me with panic!

This picture was taken on the day that the baby was born. It is of the moment that the eldest, having been spirited away from school early,  held her new sister for the very first time. The look of sheer excitement on her face is absolutely genuine. She was beside herself with joy!

I am delighted to report that after eleven years, their adoration of each other has never waned. The eldest remains as delighted, for the most part, as she was that day. For the youngest, there really is nobody to compare to her big sister, she is her world. They each miss the other so much now that university often separates them.

This picture means so much to me because, I was in a morphine induced stupor in the corner and, vaguely remember a conversation about Orange Tango, or I might have dreamt that. 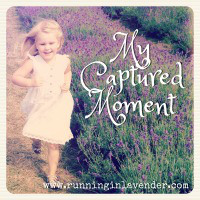 Have a lovely day X