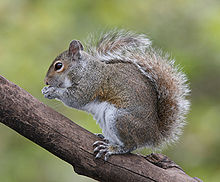 There are grey squirrels in abundance on the Wirral. However, they are a particular feature here on our Glade. We are inundated by them. One even tapped on our front window when we were eating breakfast one Saturday morning.

Mr Glade is particularly unimpressed with grey squirrels. He firmly subscribes to the school of thought that they are vermin – ‘Vegetarian Rats’ he has been known to declare them.

Most days, Jack of the Glade, has his breakfast in the garden. However, unlike the popular reputation of his breed, he isn’t greedy and doesn’t always finish it immediately.

Enter stage left – the squirrel or more accurately, squirrels! They not only run amok over our new patio and turf, but they finish Jack’s breakfast in double quick time.

Nevertheless, things have reached a new low with our invaders this week, they have actually dug a hole in our newly laid turf in the back garden. Right beside my newly planted apple tree!! 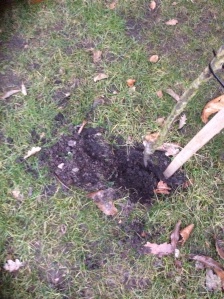 Well our ‘Gun’ dog hides out in the kitchen.

He will chase a squirrel with the best of them but, if there is a chance in hell that he might catch one – he opts to stay indoors and protect his people!  #fearless

Mr Glade could have a point, maybe they are a nuisance after all!!